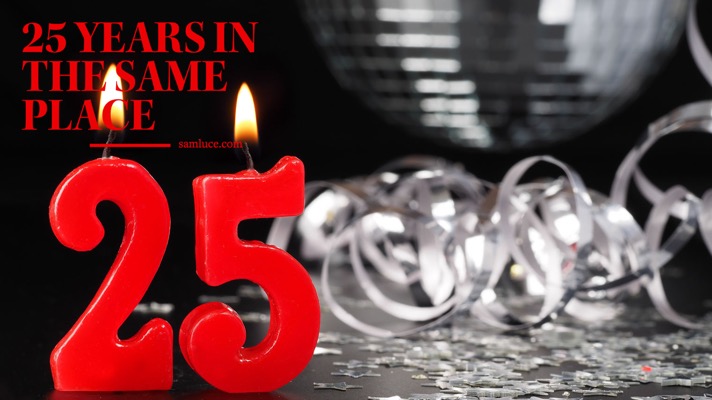 This summer has been crazy like most summers. It was so busy that an important milestone was passed, and I missed it. I just realized this week that this is my 26th summer in the same place. For some of you, that sounds unattainable. For others, I’m just getting started. It has been a battle, and it hasn’t always been easy. Growing up, my family moved every three to six years. It wasn’t awful. I made some good friends and learned things I couldn’t have learned any other way. But the thing that was hard for me my whole life was that I never had a place to go back to. A place that defined me, a place I called home.

We came to Utica, New York, and stayed for twenty-five years in the same job at the same church and have lived twenty-one years in the first house my wife and I bought. We have made a life and have old friends. We have cried lots of tears and have laughed till we cried. We raised kids away from family, and it wasn’t easy. My wife worked from home so we could give our kids a home and a place. Somewhere that is imperfect, but when our kids close their eyes when they are forty, they all will have the same picture of the home. They will remember the same church and old friends.

In a hyper-connected world, we think we are shaped by what we know, who we know, or who’s posts we like most often. Instead, what shapes us is particular places and particular people. Our culture has become more connected and more transient than ever. We don’t allow place to shape us. We are shaped by the time and place where we have been sovereignly planted. What job you work for is not an accident. The neighborhood where you buy a house is not an investment; the town where you become a part is not a fluke. These communities of time and place are the tools God uses to chisel and chip away at the unformed exterior of which only God can see the beauty of what it will become.

We see jobs, homes, and communities as tools for personal fulfillment and happiness. When we view a home as an investment and a job as a career, it shapes us. We move to a bigger house because our kids want their own rooms; what our kids need is proximity. They need to be forced to respond right in proximity to community, not retreat in the face of adversity to their curated spaces. What we need isn’t a new job; it’s to fight for joy while being misunderstood. It’s to do the right thing when others don’t. Remaining in a particular place forms your soul in a way that career advancement never can.

When you stand still in the middle of a world, gone crazy, you proclaim that your priorities are not shared, you bear witness to a different set of priorities that have shaped your loves.

Eugene Peterson was asked, “What do you like best about being a pastor?” The question came from a young woman, Stephanie. “The mess,” he said. A group of seminarians from a nearby school—there were ten of them—had asked him to lead them on a thirty-six-hour retreat. They were about to graduate and enter into the vocations they had just spent years preparing for. For three of them, being a pastor meant starting over in a second career. They wanted to spend a couple days in prayer and conversation as they anticipated what was ahead of them.

Petersons’ answer, “the mess,” was unpremeditated. It stopped the conversation. But sometimes, a spontaneous response reveals something important that had never surfaced just that way before. But mess wasn’t quite the right word. He backpedaled. “Well, not exactly a mess, but coming upon something unexpected that I don’t know how to handle, where I feel inadequate. Another name for it is miracle that doesn’t look like a miracle but the exact opposite of miracle. A slow recognition of life, God’s life, taking form in a person and context, in words or action that takes me off-guard. Theologian Karl Rahner was once asked if he believed in miracles. His reply? ‘I live on miracles—I couldn’t make it through a day without them.’ Still another name for it is mystery. Pastors have ringside seats to this kind of thing. Maybe everyone does, but I often feel that pastors get invited into intimacies that elude a more functional and performance way of life.”

When I was in my twenties, I thought the key to success was recognition and struggled when it never came. The miracles and the mysteries of life are seen not in the spectacular but in the ordinary. The ordinary looks like us showing up for our friends without being asked when they are hurting. When we remain when everyone leaves, when we stand in the middle of a world wracked by anxiety as a non-anxious presence, when we allow the people of God in the place, God has placed us to be the tools that shape us more and more into the image of God. Stay in your small house, work through the offenses caused by family and friends, and don’t think that that next job will make you happy and whole. Allow yourself to be shaped and formed by time and place.

Eugene was right. We want spectacular miracles, and those do happen, but most often, God’s miraculous work is A slow recognition of life, God’s life, taking form in a person and context. Twenty-five years of staying have taught me that God most often works and speaks in the every day and the mundane. That when you stay, you proclaim God’s grace, not your spectacular ability, is what makes you and what keeps you. My plea to you is to stay in your small house on your small street in your small town near your small church and love the people God has placed in your life to form you into his image for his glory alone. 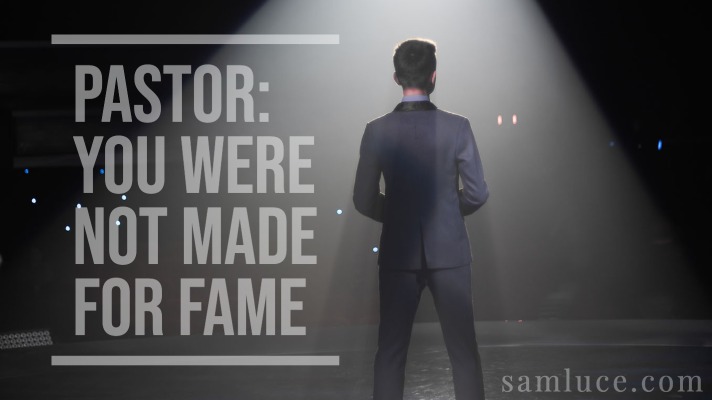 We live in a culture that is defined by fame. A culture that is saturated by fame. A culture that sees their worth based not on their financial security or social standing like previous generations had. Our cultural moment sees the acquisition of fame as the greatest good, we measure our value by followers, fans, and likes. If you ask most kids what they want to be when they get older they say usually say a YouTuber. That is not what kids said when I was young. When I was a kid most kids wanted to be the president, a businessman, a policeman or a teacher.

The lie that our culture has given into is that if I have fame I will be enough. Our culture has placed fame above power and money because those things in our information, social media-driven culture flow toward fame. Sadly this desire for fame is not absent in the church. We measure the success of our work as a pastor by weekend attendance and event participation.

What is more tragic is the people who are supposed to be a prophetic voice to the perils of culture have themselves turned the vice of fame into a virtue. Celebrity preachers wearing streetwear worth thousands, hanging with A-list stars proclaiming that they want to “Make Jesus Famous.” As the years have passed we have seen the reality is that those same celebrity preachers became more famous and Jesus became more distant. Because a heart that pursues fame as its greatest good can not pursue Christ. The way of Jesus is antithetical to fame. Jesus would regularly say hard things that were not popular because his kingdom is an upsidedown kingdom. Yet so often the temptation and the advice given to pastors is to avoid controversy. Don’t say things that will alienate anyone.

We have given ourselves and bought into the marketing lie that more is better than fame is the goal. The chasing of fame comes at the expense of our soul. You can not desire fame as your pursuit without fame taking its toll.

Contemporary pastors are tempted to measure their success, not to mention fulfillment, precisely by how well-liked they are.

Eugene Peterson commenting on the pastoral vocation said this:

Pastors commonly give lip service to the vocabulary of a holy vocation, but in our working lives, we more commonly pursue careers. Our actual work takes shape under the pressure of the marketplace, not the truth of theology or the wisdom of spirituality. I would like to see as much attention given to the holiness of our vocations as to the piety of our lives.

The toll that fame has taken on celebrity pastors and leaders over the past five years is staggering. We were not built for fame. None of us were. Jib Fowles, author of Star Struck: Celebrity Performers and the American Public (Smithsonian Institute Press), found that the average age of death for celebrities overall, was 58, compared to an average of 72 years for other Americans. His findings also revealed that celebrities are almost four times more likely to kill themselves than the average American.

Should a Christian seek to become famous? The short answer is no. Should pastors seek fame? No. The Christian life has no shortage of opportunities to seek fame at the expense of cross-centered living.

Our job as Christian leaders is not to make Jesus Famous it is to live lives of humility and lives submitted to God. It is to take up our cross and follow Jesus. Fame is not a goal to be obtained for the Christian pastor it is cancer to be eradicated.

About twelve years ago I started speaking at conferences more often. It was nice because people would come up to you and thank you for what you shared and tell you that you were amazing. The lure of disembodied ministry to the church is real. At a breakout, someone came up to me and asked how do you stay humble?

My answer was this:

My plea to my fellow pastors is to seek white-hot holiness over the banality of fame. Fame does not come easy and it does not come free. Fame like Shylock from Shakespeare’s Merchant of Venise always demands its pound of flesh.