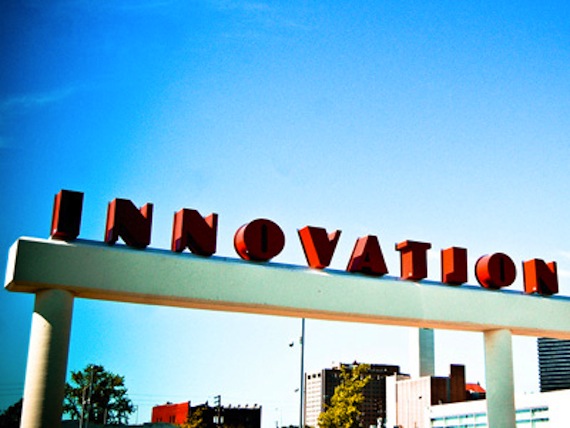 Here are a few things I believe will help your kids be more innovative. If we want our kids to be successful in the future we need to be actively working on helping them use their innovation muscles.

3. Model and explain innovation to your kids.

4. Help they learn to be flexible. To be an innovator you have to be an early adapter. You need to be familiar enough with what is out there to be tweaking it when everyone else is finally ready to start using it.

5. Tell them what you want the end result to be but resist the urge to tell them how to do it.

7. Make sure that they understand that our God is a creator and through sin we broke God’s perfect world. It’s through invention and innovation that we can begin to repair and rebuild culture. In doing so we can reflect God’s glory to a world that needs to hear and see God’s redemptive work in action.

And he who was seated on the throne said, “Behold, I am making all things new.” Also he said, “Write this down, for these words are trustworthy and true.”

When it comes to watching TV I generally like reality shows more than dramas or even comedies. I have seen almost every episode of Survivor and Amazing race, I really like undercover boss and occasionally watch extreme home makeover and the biggest loser. All of which I really enjoy, mostly because I think real life more often produces a better story line than some writer stuck in a room trying to come up with something. Bad writing drives me crazy, which lead to my eventual hatrad for the show “24” started off great ended horrible.

Last winter for some odd reason I got hooked on the Bachelor, not sure why but most likely it was because one of the girls on the show lost her husband and found out that she was pregnate in the same day. In the end Brad (The Bachelor) picked her and it was a fairy tail ending or so we thought until the after show. After the show they brought out all the couples that “made” it to give them advice on how to survive after the show. Only one couple was married and made it two were engaged without a date for a show about getting married that’s really bad. 22 seasons and 1 happy couple, nice.

I then remember from watching survivor that there has been at least 5 or 6 happy couples as a result of being on survivor. Survivor is a show where you have to outwit, outlast and outplay everyone else on the show. How has a show where you try to outlast and outplay everyone produce more long term relationships than a show that is supposed to be all about finding that perfect someone.

The difference I believe is that when you are stuck on an island you have no option than to be who you really are. There are no limo rides and fancy dinners at the top of the eiffel tower. You aren’t kissing 20 girls to find the one while leading 3 or 4 on the whole show.

I watched one episode last week of the Bachelorette, words can not describe how horrible that episode was. The Bachelorette was being “roasted” by the guys on the show it was horrible. As someone who really likes reality TV and as an American the Bachelor and Bachelorette are an embarrassment. It is so sad that the producers on that show care more about ratings and creating drama for ratings than they do about truly providing a happy ending for anyone related to the show. I will never watch another episode of that awful show. Exploiting the very desire God put with each of us to love and be loved is unforgivable in my book.

While watching the show I tweeted this:

“If any of my kids ever go on the Bachelor or Bachelorette I will have failed as a parent. What an awful show.”