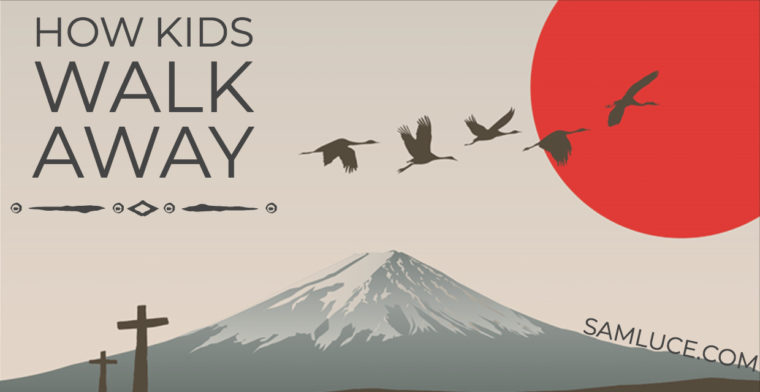 Who you love informs how you act which in turn informs what you believe. In the American church, we have moved away from a physically practiced liturgical faith to a faith primarily of mental accent. What we believe and what we do are not connected. Some have seen this mental belief divorced from practice as harmful causing a return to returned to liturgy, but liturgies disconnected from Biblical belief. The result?We have people who talk about personal stories having the same power and weight as Scripture. We see people gathering around tables at homes to preach the gospel of grace with stark absence of repentance. Instead, we long to see people gathered around the Lord’s table marked by the forgiveness of one other and reconciliation to God through Christ.

Kids don’t generally wake up and decide to be an atheist. They lose their faith over time by practices resulting out of what they love. Philosopher James K. A. Smith says you are not what you believe or think but you are what you love. As spiritual beings with physical bodies, we underestimate how physical practices reinforce truth to our kids. You do what you believe and you believe what you do.

In the book, Silence by Shusaku Endo,a Catholic Priest, Father Rodrigues, goes to Japan during a time of intense persecution of the Christian faith in order to seek out a Priest that has been captured. He goes with confidence in his own abilities and a bit of arrogance in the strength of his faith. Eventually, Father Rodrigues is also captured and tortured alongside the people he had ministered to in Japan.

The Japanese learned that killing Christians spread Christianity so, instead, they started capturing leaders and forcing them to step on the face of Jesus. They subjected Father Rodrigues and those who followed him to unimaginable horrors. They told Father Rodrigues that these horrors would stop if he would just trample the bronze sculptured face of Jesus they had placed on a wooden board. His captures said to him “It is only a formality. What do formalities matter?’ The interpreter urges him on excitedly. ‘Only go through with the exterior form of trampling.It’s only a formality. It didn’t mean anything.”

But in the physical trampling of the face of Christ Rodrigues trampled the remnants of a shattered faith. He turned from his faith and lived in Japan helping the Japanese government identify Christian contraband smuggled into the country. Father Rodrigues, living a life marked by shame, asked God why he was silent when he was being tortured. God responded to him, “I was not silent, I suffered beside you.”

In our country, we do not have armed guards forcing us to step on the face of Jesus. We do however have a secular culture and progressive Christians asking us to trample on Scripture and tradition in order for us to find acceptance at the table of tolerance. The modern movement away from orthodoxy has the tinge of Japanese guards saying to our youth, “Trample, Trample!” and the voice of the serpent saying “Did God actually say?” Our kids are not being crushed by atheism, they are being seduced by secularism, materialism, and individualism.

So how do we raise kids who will not trample the faith handed to them?