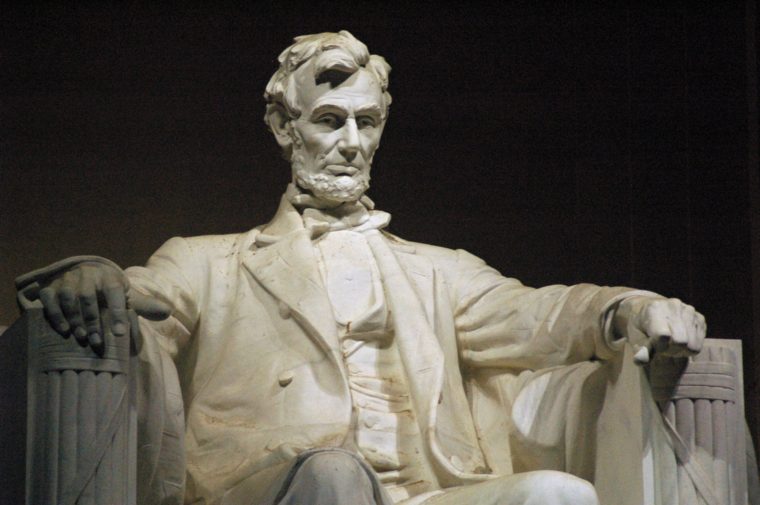 During this campaign cycle, we have heard Hilary Clinton quote the infamous misattributed quote from Alexis de Tocqueville. She has said as many Politicians before her have said: “America is great because America is good.” This is correct but incomplete. What is good? We need fewer Chants of “Lock her up” fewer emails colluding to steal our parties nomination. We need more conversations about what we as a country can agree on what is good, true and beautiful.

I have also come to the conclusion that both sides are right. They both see problems with our country and see that we are in need of reform. While both see different parts of the whole that are broken, if we can refrain from chucking bombs at each other long enough to listen to each other perhaps we can realize that the common ground we are losing with every vicious election is the founding principles of our country. If our republic is to survive, we must return to our first principles. The Brilliant Os Guinness says it this way:

…what the Jews understood by the hope of national renewal through a return to the ways of God and the Puritans understood by the hope of renewal through personal and corporate revival was paralleled politically in the ideas of the founders. George Mason, characteristically more conservative, spoke of “a frequent recurrence to fundamental first principles,” whereas Thomas Jefferson, who was more liberal, spoke of the need for “a revolution every twenty years.” Even Machiavelli agreed with this, though sadly not his modern disciples: republics must frequently return to their first principles. ‘“Things are preserved from destruction by bringing them back to their first principles,’ is a rule in Physics; the same holds good in politics.” …I am convinced that America faces no problem today that cannot be resolved through a return to America’s first principles. Yet the plain fact is that those who reject the founders’ understanding of sustainable freedom are hardly likely to take seriously their views of national and civic renewal, so the folly and madness continue unabated, at least for the moment. If there is no American renewal, American dominance can be followed only by American decline. America has reached the point where, apart from restoration, there is no other choice.

So today go vote. Tomorrow no matter who wins remember that our Republic will prevail not through policies on the left or the right but reformation through going backward together to go forward stronger. We have to get this right.

If justice is not to be denied and if, as Lincoln said in his noble second inaugural address, the judgments of heaven are “true and righteous altogether,” then America will face the fate of all overreaching empires: the United States will be indicted for its hubris and judged before the world by whether it has lived up to the standard of its own ideals. 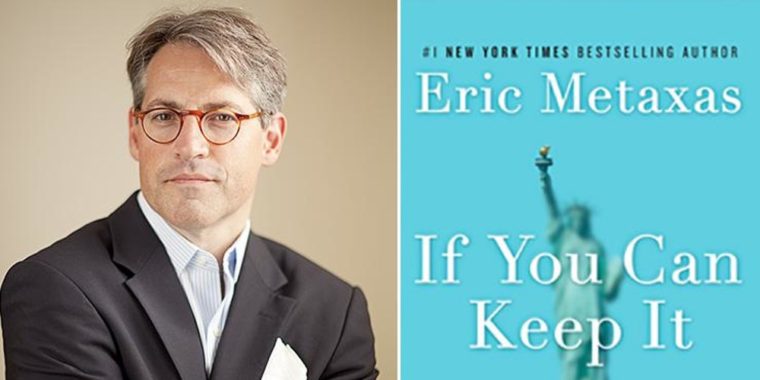 I have been huge Metaxas fan since his voice work as the narrator of VeggieTales rendition of Ester. I joke. I frist became aware of his writing from his book on Bonhoeffer and have since read most of his books. In his writing, his candor, wit and wisdom always shine through. Eric’s newest book If You Can Keep It is no different. I will be posting a review on my blog of Eric’s book in the coming days. I really enjoyed it. It releases officially this Tuesday, June 14th. Here is the Amazon link to pre-order until then and to purchase after the 14th.

How did the idea for the book first come about?

Honestly, I’ll never forget it. I was listening to the author Os Guinness
give a speech about the Founders unique idea of “ordered liberty” and
he described it in terms of what he called the “Golden Triangle of 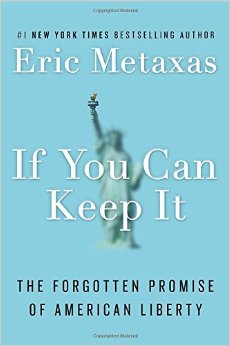 Freedom.” It all made perfect sense, but I was shocked and
embarrassed to realize that somehow I’d managed never to have heard any of this before and that neither had most people I knew. So after I stopped perspiring, I tried to figure out how a reasonably well-educated American could miss these ideas that are utterly foundational and central to what America is and who we Americans are as a people? What could have happened? Then I read his book A Free People’s Suicide and was staggered further still, because I realized that if this country — which was expressly founded on these ideas — had ceased to understand them and pass them on to the next generation, it would eventually cease to be America in any real sense, and I realized that that’s precisely what had been happening in the last four or so decades. To say that I had a sense of urgency about it is an understatement. I talked about it whenever I went and pushed Os’s book on everyone I
knew, and as my thinking on it all expanded I realized I needed to get my own thoughts into a book — and to promote that book as widely and forcefully as any book I would ever write. Because I saw that once America devolved to being “America”, the whole world would suffer. Despite our ills and shortcomings, we have been a beacon of liberty to the whole world — my parents, for example, as I discuss in the book, who came from places of misery to this place that represented hope and a future — and if that beacon should go out in our generation, what Lincoln called the “last best hope of earth” would have vanished. It would be as though we had effectively committed suicide because we had forgotten to eat. So to cut to the chase, this book is about saving America, and in doing that, saving the world. That’s all. No pressure, right?

Throughout the book you refer to the popular quote “America is great because America is good, and if America ever ceases to be good, America will cease to be great.” What does that mean to you and how has America strayed from that?

This has manifested itself differently between liberals and conservatives. For example, conservatives have sometimes felt that America’s greatness was indeed that kind of chest-beating pride that people have misunderstood as “American exceptionalism,” and have forgotten that we have an important role to play in reaching out to the rest of the world, in welcoming others to our shores and in sharing our blessings — whether ideas regarding freedom or material blessings — with others. They’ve sometimes acted as though greed were indeed good, as though laissez-faire capitalism didn’t require a moral component to work as it should. And they’ve sometimes acted as though self-government didn’t require virtue — and a people and ethos that that prized virtue and hailed it as a social good. On the other hand, liberals have mostly in recent decades misunderstood the role that faith has played in our history and will continue to play if we allow it to do so. People of faith have been at the forefront of the Abolitionist movement and the Civil Rights movement. These were not secular movements. Our history in doing good could not and did not happen without people of serious faith playing a vital role, so to allow a new secularism to push people of faith out of the cultural conversation is to deny our history and to prevent our future together in any meaningful sense.

In If You Can Keep It, you write that self-government cannot exist without virtuous leaders. What do you think has been the biggest cause of the erosion of virtue in our modern-day political leaders?