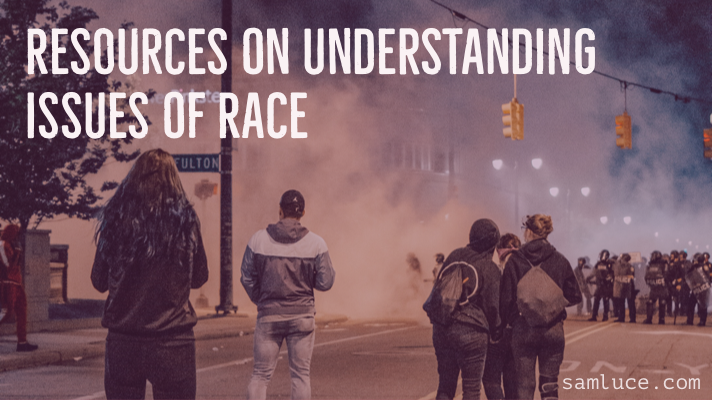 Growing up in Norwegian middle America without television, I don’t remember even see a personal of color until I was around 11 years old. I was always a reader and always loved history I read about the awful treatment of persons of color in our country. It broke my heat then it breaks my heart still.

Coming to a greater realization of race being a broader issue rather than only a personal one has been and continues to be a journey. One that we all need to be on together.

I enjoy social media (most of the time). For me, it’s more of a hobby and a way to hear what’s happening in the world without having to watch the news (something I never do). I have learned over the past twelve years to take social media with a grain of salt and extend grace to those on it because we don’t always say things the right way. I prefer long-form content like blog posts and books. I enjoy reading, and the journey I have been on to see the world through someone else’s eyes has been a long, meandering unexpected journey. It has taught me as most good books do that I have much to learn.

The first book I read on race was the story of William Wilberforce and his fight to abolish the slave trade. It was that book that leads me to read the theology and biographies of John Newton. John’s story is a wild story of a young man who grew up with slaves, became enslaved himself, came to faith, and then became a slave ship captain as a Christian. He eventually became the catalyst for the abolition of the slave trade in England and the West Indies.

The next book that came across my path was a result of a personal curiosity with why people of color refer to other people of color as “Uncle Toms.” I have my children read classic works of literature over the summers so two years ago I read Uncle Tom’s Cabin with my oldest boy. I cried through much of it and marveled at the faith and Christ-likeness of many of the African characters.

The books I am looking to read are ones that are truth-telling and redemptive. This doesn’t mean that the ink spilled on the pages of books doesn’t accurately describe the horrors of the blood that cries out from the ground against our country. The difference is what is the worldview of the author what is their teleological framework.

I started with The Color of Compromise: The Truth About the American Church’s Complicity in Racism by Jamar Tisby. I love the church. I’ve worked at the same church for 23 years. This book was hard to read. To read how so many of my brothers have been tortured and killed in the name of God is not a light subject but is necessary. We can’t heal what we don’t name. Racism is not just evil its a sin.

I am a huge Malcolm Gladwell fan. I listen to all his podcasts and have read every one of his books and always read his new book as soon as it comes out. In God’s providence, Malcolm’s new book was Talking to Strangers: What We Should Know About the People We Don’t Know (I recommend the Audiobook version). In this book, Gladwell talks about the issue of race and sexual abuse that were hard to hear. The story he tells of Sandra Bland it is gut-wrenching. Gladwell has a way of communicating that connects with how I learn. What he has to say in this book profoundly stuck me.

As I read each of these books, I was moved to tears, and I am not a book crier. I was moved because I realized what I did with the issue of race was turn my head. I did what I do with all the sad things I know they are real but pretend they aren’t true. I used to tell myself that people who had died were still alive somewhere in the world because I couldn’t bear to deal with the loss. In God’s good providence, this unhealthy way of dealing with pain is beginning to change in my life. In the past several years, I have encountered difficult circumstances that have forced me to re-evaluate what I think when I think of God.

I have come to see that I need his mercy more than ever. In times of difficulty and sorrow, I need a picture of what God is like. I need to be reminded as Paul reminded the church at Philippi

Philippians 2:5-8
5 In your relationships with one another, have the same mindset as Christ Jesus:
6 Who, being in very nature[a] God,
did not consider equality with God something to be used to his own advantage;
7 rather, he made himself nothing
by taking the very nature[b] of a servant,
being made in human likeness.
8 And being found in appearance as a man,
he humbled himself
by becoming obedient to death—
even death on a cross!

May we grow in the grace God provides. May we love each other as Christ has loved us. May we like Christ never use our influence for our own advantage.

I haven’t read these books but they are next on my list of books to read.

The Warmth of Other Suns
Under Our Skin
United: Captured by God’s Vision for Diversity