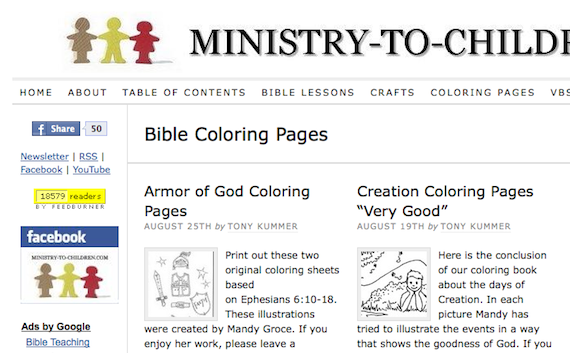 Ministry To Children is a fantastic resource for anyone associated in any form whatsoever with Children’s Ministry. They have a huge variety of resources for anyone from a stay at home mom to a full-time kids worker. A few months ago I met Tony Kummer he is a great guy, what I love most about Tony is that he uses his influence in the #kidmin community to push others to the forefront. He and his group of writers at MTC do an amazing job of creating quality FREE content.

He has lessons, object lesson and he is specifically advertising coloring pages on my site. I don’t care what curriculum you use if you have ever spent more than 15min teaching preschoolers you start looking for a coloring page. They are the great preschool equalizers. So do me and yourself a favor and head over to Ministry-to-children download a coloring page and tell Tony that emo spidey sent you. (Tony started a kidmin firestorm a while back when he got everyone on twitter to agree I my avatar looked like emo peter parker.)

One of the things I find funny is how serious the south still takes the civil war. I remember hearing people from the south on a few occasions say that they can’t believe that the north won the war, after someone from the north does something stupid (we definitely have our share of ding-dongs up here.) I started to think maybe the south should have won, they are more polite, they have sonic, chick-fil-a and sweet tea. Then I discovered this video and the corresponding website and I was reminded afresh why the North won the war.

Here is his incredibly nuts website. Caution! Ducktape your head first so it doesn’t explode as you read.

Every year I try a few different things at camp. Some of them become a part of camp others we NEVER do again. Here are a list of things that we tried this year at camp.

1. I used social media alot – The past two years I have had a hard time getting Mom’s and Dad’s to go to camp as councilors we also had a down year this year attendance wise so one of the tools I wanted to use to fix that was using social media to help peel away the mystery of camp. So parents who had kids at camp could see what was going on and parents who’s kids had yet to attend could build excitement and anticipation.

What social media did I use?

Facebook – Most parents I know have a facebook and know how to use facebook so this is by far the most helpful in getting the info out there. From face book I linked to my blog, because well I don’t like facebook and I can control the layout of my posts on my blog much easier than FB. On facebook I published updates from my twitter account and posted pictures for parents. I uploaded all my photos to facebook using pixelpipe for my iphone.

My Blog – This year I summed up each day with a blog post and video that supported and summed up what we did. I shot and edited all that footage on my iphone with iMovie for the iPhone. The reason for using my blog was two fold. 1. I could control the layout (have I told you I hate facebook) 2. So parents who didn’t know I have a blog could find it because I often write about stuff I am thinking for Uptown as well as things that could help other parents from what I am learning as a parent.

Youtube – I uploaded videos I shot and edited from my phone up to Youtube directly. Very stinking cool

Ustream – We used Ustream to put our evening services online for parents to view. I love the idea of parents spying on kids without kids knowing that their parents are spying. We had a couple of hiccups and will plan to do streaming better next year.

2. Journals – I made some journals for the kids – nothing elaborate but just got some notebooks from the dollar store and added bling to them that pertained to the theme of camp. Each morning I shared a few minutes and then the kids met with their councilors and talked through the assignment I gave them and wrote in their journal. This worked great we will do it next year for sure.

3. Partner with parents – This year I tried to include parents in on the process of camp through social media, and on the last day I made a video for parents summing up what we talked to their kids about each day and gave them some ideas for next steps after camp.

What should I do different next year? 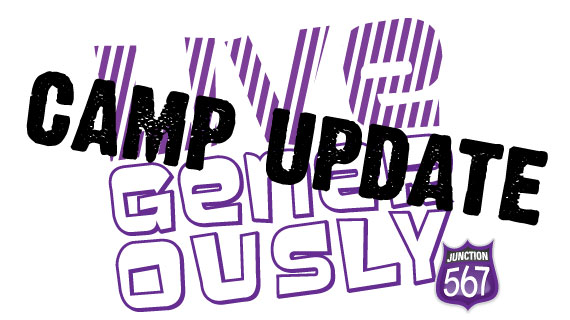 Hey parents I am so thankful for what God did in the lives of your kids. We had an amazing time. I made  a quick video to help you leverage what God did in your child’s life. Thanks so much for sending your kids to camp, we had a blast and God did amazing things!

Well we had a great second day. We started with rain and ended with sky, so that was great.

We started out with chapel talking to the kids about the two things they need a testimony (writing down what God has done for you) and a testament (reading the bible.)

It was far to cold to go swimming. It was drizzling out so we had to for the first time in years put plan B into effect. Plan B consisted of 13 minute to win it stations inside where every member of each team would get an opportunity to play each game. The final round each team would pick one person to represent their team and do all 13 challenges.

After lunch the rain cleared long enough for us to play a wide game outside, called gold rush. After that we did another plan B activity, we called it Rainy day Olympics (everything sounds better when you call it the Olympics. We played, 2 base baseball, dodge ball, and toilet paper relays.

Caleb drove up from Albany just to preach then get in his car and head back home. He did an amazing job. It’s a weird feeling to sit and listen to a kid speak to the campers of the very camp he attended. It’s a weird feeling. He preached that our lives were meant to be poured out. In order for us to live generous lives we need to have God pouring into us so we can pour ourselves into the lives of so many. Lots of kids were ministered to! Looking forward to see what you want to do tomorrow.