For most of you out there you know that I am a jaded former uber fan of the “hit TV show” 24. I thought I would do a Orange Week Giveaway that would have all the hype and drama associated with Jack Bauer. Plus the product I am giving away is called “Exit interviews” Jack gives those to bad guys on a weekly basis.

On this DVD from the reThink Group

Everybody Needs to Hear This: Exit Interviews:

Together, they reinvented ministry to children and families. In four different churches in four different parts of the nation, they designed programs that ministered to thousands of children every week. Their ideas defied schoolroom-inspired Sunday school models and shattered accepted standards of Christian education. Now, as each one has expanded beyond those original churches into national ministries, Reggie Joiner, Sue Miller, Craig Jutila and Jim Wideman are able to speak openly and honestly as never before.

I am tempted to sign up to win this myself. Is it unethical to win your own contest. I’ll have to run that one past Jack. Anyway. I have a massive amount of respect for each person on this DVD. They have impacted my life a kids minister in ways they may never fully understand.I am great-full for their influence and anytime I can hear more of their heart and what they have learned I am down with that.

If you want to win here is what you do.

RT @samluce Orange week give away! Win an non-autographed copy of exit interviews from the ReThink. http://bit.ly/6kRtfQ #kidmin #orange10

*The contest will last 24 hours if you have watched the show lots can happen in 24. So do it now

I have been trying over the past few months to come up with resources that can help our parents be more connected to what we do on Sunday and enable parents to connect with their kids during the week.

What I have tried that hasn’t worked so well in our church culture:
1. Parent Blog –
2. Parent Twitter account –
3. Handouts on Sunday –

I am very excited to be trying out a couple new ideas next month.

1. One monthly Godtime card vs a weekly Godtime card 252 basics provides – I got this idea from Kendra (BTW she has one of my best kids ministry blogs on the web) I tweaked it a bit for us. I added scripture memory and a place for parents to sign off they they did this with their kids so their kids can in turn get points to our Uptown store. I also changed the icons a bit.

The reason i like this is because I believe less is more. I think sometimes parents are overwhelmed by amount of handouts so my thought is if we give them 1 handout a month that is more colorful and has a built in incentive for the kids may help. 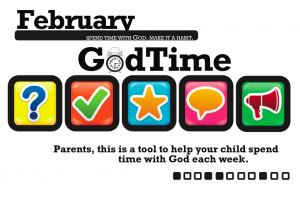 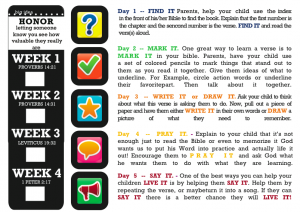 2. I am going to make a CD where I explain what the kids learn each week in Uptown and have some basic applications step parents can take to help their kids walk out what they learned that week.

This idea came from a volunteer and I think it’s a great one. It is cheap and should be effective because it’s more than a paper that parents can listen to while shuttling your kids all over the place.

3. Is there anything the church can do differently to help the problem of “too few workers” in the present?

I believe that pastors, youth pastors, and other church staff members should keep a pulse on what is going on in the children’s ministry program. After all, that is there future. This will help you share the burden for children’s ministry and will effectively be discussed directly and indirectly by the staff and congregation.

Another way to keep children’s ministry on the radar of the congregation is to preach in the main service whenever the pastor will let you. It would help people buy into your vision but would do wonders for the church body. Youth and children’s pastors see things the pastor will never see and would not understand if he did!

Here is the link to Part 1 in case you missed it.

2. What are some ways that you suggest I invest in a few of them?

– Visit them at home

Many children’s pastors I know get bogged down in their administrative duties. Communicating with the parents first of course, and then spending time with a child at their home can cure any emotions of workaholic-ism. This can also begin to answer the question of how you impact families and kids outside of the few hours a month they may come in the doors of your church.

By knowing the child’s family, whether the parents are regular church attendees or never com at all, can have a major impact on the family. If you see a secondary purpose in children’s ministry as to reach the family, then knowing them should be imperative.

This past week I had the opportunity to sit under the teaching of Dr. Dallas Willard, author of Spirit of the Disciplines and Renovation of the Heart and professor of psychology at USC. He taught in depth about spiritual disciplines on “The Human Side of Holiness.” (If you have any interest in learning about the disciplines, I would be happy to email you notes and book recommendations.) During the week, I had a few minutes to sit down with the jovial old man and gain wisdom on his thoughts of about Kid’s Ministry:

1. In your opinion, what is the essence of children’s ministry?

Allow church to be a place that offers love and reception like no other place they can go, so that when they are without that in their life, they crave it. If they are not getting it anywhere else, they should be able to count on getting it at church.

The Kingdom of God was Christ’s main topic on earth yet we rarely hear those words mentioned in church. In the basic sense, every person has a Kingdom (or Queendom for little girls). Each person is responsible for their own Kingdom and if they understand the teachings of Jesus will surrender their Kingdom to be apart of the Kingdom of God. It’s your job to help children understand that.

Numbers really work against us in ministry. The harvest is plenty but the workers are few. One person can really only go deep with a few kids. We need more people to do the jobs that one person is expected to do by himself. In the end, you have to be open to the Spirit and pour into a few kids that seem to have some potential. With God’s help these kids will end up impacting the others around them and may in time reverse this whole dilemma of too few workers.