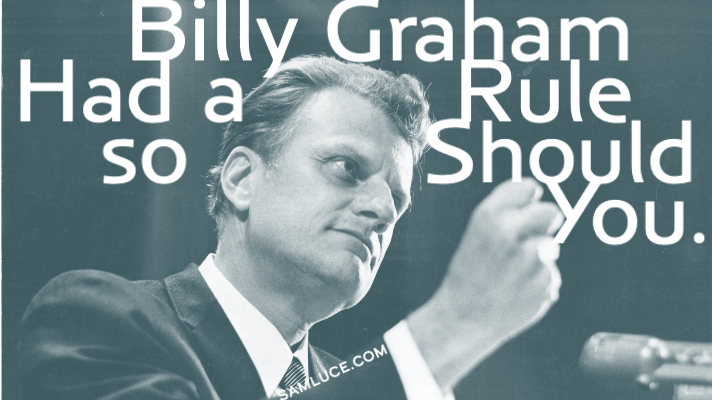 A couple of years ago Vice President Mike Pence mentioned that he follows the “Billy Graham Rule.” This created confusion outside the church and fresh debate inside the church as to how men and women should relate in the workplace.

If you are not familiar with the Billy Graham Rule it came from Reverend Graham’s observation that so many evangelists who had fallen into immorality while separated from their families by travel. Billy said “We pledged among ourselves to avoid any situation that would have even the appearance of compromise or suspicion. From that day on, I did not travel, meet, or eat alone with a woman other than my wife.”

For those of you who disagree with this rule let me say that I hear you in many ways it has gotten weird. I remember a couple of years back talking to a seventeen-year-old boy. He told me he is following the Billy Graham rule. I told him does he plan on getting married ever. He said yes. I then told him there is a good chance he will need to revisit that rule.

This has become a much-debated topic in evangelical circles. Many do not like this rule because it is seen as misogynistic and limiting of women in the workplace. The argument goes that if women are excluded from dinners and meetings they will be excluded in boardrooms. While I am not nieve enough to believe this never happens I don’t think it’s systemic in churches or organizations.

What seems to be far more systemic in culture and churches is divorce. Does disobedience to the Graham rule mean you will have a divorce? Not at all, but in twenty-plus years of marriage counseling infidelity never starts in the hotel room. The two most prevalent causes of infidelity are extensive time with the same person of the opposite sex and alcohol. In saying that I am not saying spending time with the opposite sex is sinful nor is alcohol inherently sinful. Yet there is rarely a story of a spouse breaking their marriage vows that didn’t involve the excess of time and alcohol. We need guardrails. All of us.

For those who think this is a right-wing white evangelical issue. It’s not. Its wisdom. Here is a quote from an Atlantic interview with Ta-Nehisi Coates who is black and an atheist.

I’ve been with my spouse for almost 15 years. In those years, I’ve never been with anyone but the mother of my son. But that’s not because I am an especially good and true person. In fact, I am wholly in possession of an unimaginably filthy and mongrel mind. But I am also a dude who believes in guard-rails, as a buddy of mine once put it. I don’t believe in getting “in the moment” and then exercising will-power. I believe in avoiding “the moment.” I believe in being absolutely clear with myself about why I am having a second drink, and why I am not; why I am going to a party, and why I am not. I believe that the battle is lost at Happy Hour, not at the hotel. I am not a “good man.” But I am prepared to be an honorable one.

I share Coates’ concern. I want to be honorable. The way we function in an honorable way is within boundaries we create with our spouse. We need to create boundaries that serve to protect our marriages from going over the cliff. Pastor and author Andy Stanley says it this way

I don’t think one blanket rule is the best way to create guardrails but its a good starting point.

How Do We Create Healthy Guardrails?

Understand what the Bible teaches about the total depravity of mankind. – The Bible if you have read it is full of stories that reinforce the theological understanding that everything has been marred by sin and tainted by the fall. Ta-Nehisi Coates said this about himself “I believe that the battle is lost at Happy Hour, not at the hotel. I am not a “good man.”If you don’t see yourself as a sinner who needs a savior but rather as basically good you will overestimate your willpower your tolerance and your faithfulness. If Coats as an atheist can see this? Why can’t we?

Talk with your spouse about what guardrails need to be in place to honor God and each other in your marriage. Go with whoever has the most sensitive conscience on this topic.

If you need to make an exception to your per-determined guardrails communicate. My wife and I have a few guardrails we have set but when I am going to meet with a woman I always let her know before and discuss with her after.

Understand you are not Billy Graham. People who are powerful and famous have to be far more careful than someone who works from home. Fame, influence and travel all make guardrails so much more necessary. For most of you reading this those are not realities for you so even though you need guardrails you probably don’t need the same ones as Pence and Graham.

Our desire as Christians should be to primary to honor God in all we do, secondarily to love our spouse and kids well, and lastly to love our neighbor as ourselves. Setting clear guardrails helps us do all three.