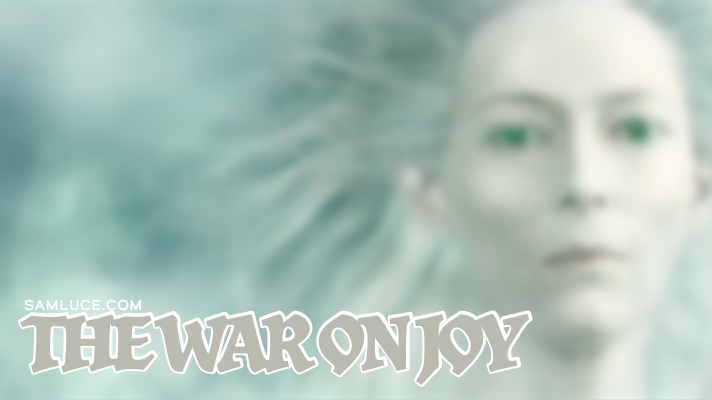 But again the contrast goes beyond the weather and seasonal change, and perhaps surprisingly, centers in key ways on food. The Witch expresses anger at gluttony and self-indulgence; however, she also gives Edmund Turkish Delight that has been enchanted so that “anyone who had once tasted it would want more and more of it, and would even, if they were allowed, go on eating it till they killed themselves” (Ch. 4). Indeed, the Witch provides two meals to Edmund: the enchanted candy and stale bread and water. The Witch and her evil are the origins of both gluttony and asceticism, of sinful indulgence and sinful austerity.

In contrast, we see Jesus often break bread with his disciples. In fact, it was in the breaking of bread that they recognized Jesus after he had been raised to new life. It was at a meal that Jesus promised that he would once again eat with us at the marriage supper of the Lamb. In heaven, we will not float around on clouds shooting people with arrows. We will experience the true joy that the world shows us in part in the good gifts God has given us. Gifts of friendship, gifts of food and drink, gifts of beauty in the world he has made.

Another contrast was how each of the Pevensie kids was given a gift. Each of the kids received a gift from a sleigh. Lucy was given a dagger for protection, a healing cordial for help, Susan a bow for protection, a magic horn that calls for help, Peter a shield for protection, and a sword for help. Edmond was not with his family. He was in the witch’s care. He had received his gift from her sleigh. It was Turkish delight that was so delicious that you always wanted more till it drove you mad. Edmonds gift was for his own self-gratification and was a means of the witch’s manipulation. It is a reminder of Digory, who was tempted to eat the silver apple. You “Shall find their heart’s desire and find despair.” Edmond found his heart’s desire but also despair. The gifts his brother and sisters were given were not for themselves exclusively. They were for the protection and help of themselves and others. The love modeled for us in the Bible is a self-giving love, not a self-gratifying one.

The gifts we are given by God are meant to be used for the help and protection of others not for the promotion or gratification of self.

Children often wrote to C.S. Lewis to ask him about Aslan’s true identity—his other name in our world. Lewis always answered by giving hints, including this one: “Who in our world arrived at the same time as Father Christmas?” (Hint: Read Luke 2:1-20.)

One of the things that have always saddened me in this story was how Edmond wasn’t there to receive a gift. He missed Father Christmas because of his treachery. But what we will see in the coming weeks was Edmond didn’t get a gift from Father Christmas. He got Aslan himself. He received what he needs more than anything else in the world. He needed forgiveness for his sins, just like you and me. We need forgiveness. Edmond is broken by his sin. He comes to Aslan and receives mercy. He receives forgiveness. He receives Aslan himself. This is the call you and I come to Christ. Find forgiveness. Because “God made the One who did not know sin to be sin for us so that in HIm we might become the righteousness of God. 2 Corinthians 5:21 This is the great exchange our sins for his righteousness. This is the basis for our Joy. This is the deeper magic forgiveness, redemption, and reconciliation that the witch feared but could not understand.

Sign up to receive my blog posts via e-mail and get a FREE copy of my NEW Online Safety e-resource.
Your information will *never* be shared or sold to a 3rd party.
Comment1 | Share | Tweet | Pin It | Buffer | print | email
Categories: Gospel, Leadership

One thought on “The War on Joy.”