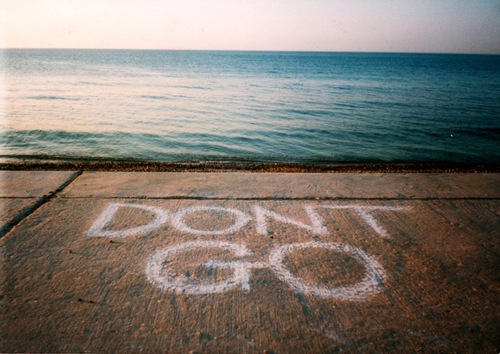 The blog post is part of a two others. My friends Kenny Connely and Carey Nieuwhof both wrote blog posts today around this idea. I wrote about the importance of staying, Kenny is talking how to leave well and Carey is addressing when you should stay and when you should leave. This is a conversation that needs to be had because of the ramifications it has on the local church. I hope you find each of our posts helpful, encouraging and challenging.

We live in a transient culture. The US Census Bureau found in 2007 the average person moves 11.7 times in their lifetime. Growing up in the home of a Bio-Vocational Pastor I moved a bit more than that, leaving your home and your network of friends to start over is not easy it takes courage. I have now lived in the same town and worked at the same church for 19 years and I can tell you staying takes as much courage as moving.

One of the things I missed by moving so often as a kid was seeing people get older. I always saw everyone in one stage of life. We moved every 3-5 years I saw people in snapshots of their lives. I didn’t attend my first funeral until I was 19 years old. I was never around long enough to either see people suffer or know them well enough to know they were suffering. When you have walked through life long enough with friends to both teach them in kids church, watch them get married and then dedicate their babies the relationships are deep. The beauty and the pain of deep relationships is that the further deep the relationship goes the more painful and bittersweet the sorrows of life become. Some would say why invite pain and sorrow into your life? But it’s not that way. Pain and sorrow need no invitation they visit each life those and those who know you see. I have found that more than any conference I have attended or speaking invitation I have accepted what has changed my life most is holding the hand and praying for a dear friend in the last moments of their life. To care for people deeply enough, to allow them in, to walk through life with them and to watch them as Paul says “Be swallowed by everlasting life” is an honor and a privilege. Two weeks ago I held the hand of a dear saint the night before she passed. I told her the beauty of the Christian hope is we never have to say goodbye only see you later. She gave me a hug and told me to keep taking care of the church. I hugged her goodbye, and she looked at me and said: “See you later.” What they don’t tell you in Seminary, in books, and on blogs, it’s moments like that when you see the grace of God in the face of old friends you realize the pain of the courage to stay is worth it.

When you are in ministry, and you move so often is you miss seeing the end result of your good and not so good ideas. When you move around every three years, you have a set of things you do, tricks you have learned. When you don’t stick around long enough to see what happens when those ideas mature you tend to think those ideas will work out and sometimes they do and sometimes they don’t. When you move often, you tend to be more loyal to your ideas than you are to people. You have seen them implemented elsewhere so they should work here as well. When you stay, I have found you think more in terms of long-term effects rather than short term gains. One of the most difficult and humbling things about working in the same church for so long is I have seen how some of my innocent ideas that were not good ideas actually hurt people. To this day it breaks my heart. As I type, I think of a few kids and a couple of families who are no longer a part of our church because of my “good ideas” that were really not so good. As I reflect on almost two decades in the same church, I am filled with conflicted emotions. I think of great victories but also of great losses. What I know is that younger Sam did a better job than he even knew he was doing because of the grace of God. Older Sam feels the pain of loss as he thinks of the kids he taught for years who have walked away and realized his need for grace to endure and prays that they will return by the grace of God. The courage to stay means to the courage to admit you were wrong.

The courage to stay forces you to push past your pain and frustration and rely more on Christ. There was a point in my journey a few years ago where I almost left. I was facing things I felt were unchangeable. I did what most people would do since I couldn’t change my situation I would change my location. Through a series of events that transpired, I ended up staying. We worked out those situations and because of the graciousness of my pastors and leaders, our relationship has only deepened. Sometimes leaving is easier because it keeps you from having to say hard things to others and it keeps you from having to hear hard things from others. I am a stronger more grace-filled leader because I stayed.

The courage to stay also redefine how you define success. I am all for church growth. I want every church to grow that preaches the Cross of Christ. What I have found is numbers are only part of the story of what true success in ministry is. Staying has taught me that success is not measured in days or months it’s measured in decades. Pastor if you are thinking about leaving I ask you to prayerfully consider staying.

When my wife was sick this winter. I saw people who have been friends for years love my family in ways we didn’t deserve. It was overwhelming in every way. I think the reason that so many people poured out love to our family so graciously is because when you stay somewhere long enough and you walk through enough fires at some point you stop being a church and become a family. There were many times during Sandra’s treatments where I felt like I was at the end of the grace that God had for me and someone would do something and say something in such a way I knew it was the tangible grace of God towards me. I think partly that grace was because I stayed.

There have been many times where I have felt like quitting, walking away. As a pastor, you have many opportunities for those feeling to be legitimized. One of my favorite quotes by Kent Hughes that I say to myself nearly every day is my prayer for every pastor who feels used up burnt out and hurt. I say to you endure. Endure. Not because you are strong but because you are weak, and He is strong. Not because you are smart enough but because His grace is enough. Endure because of the grace and the strength God provides.

Endurance in the midst of trials declares that the gospel is true and that Jesus is worth it!

Sign up to receive my blog posts via e-mail and get a FREE copy of my NEW Online Safety e-resource.
Your information will *never* be shared or sold to a 3rd party.
Comment6 | Share | Tweet | Pin It | Buffer | print | email
Categories: Ministry, Personal

6 thoughts on “Dear Pastor: Stay Where You Are.”