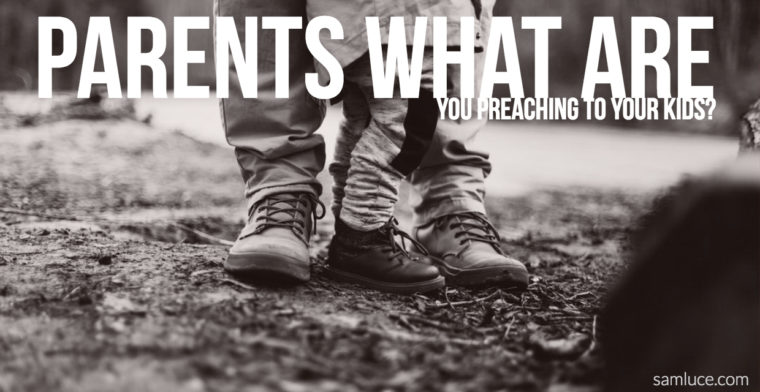 One of the more sobering realities in the life of a parent is that your life is preaching a message to your kids. They will leave your house with the message that your life preached ringing in their ears. When I first became aware of this reality, I started listening to myself. You know what message I was preaching? I kept saying “Stay safe and be careful.” I was teaching my kids that risk is wrong. That stepping out into the unknown is not worth it. I have since been more intentional about what I preach with my words and actions.
Recently one of my favorite Pastor/authors Eugene Peterson passed away. At his funeral, Peterson’s son described the one message his father preached in his church and to his family through his life.

“God loves you.
God is on your side.
He is coming after you.
He is relentless.”*

Eugene Peterson spent his life in a small church preaching a profound message to his church and his kids. One that he often repeated with his words and by the grace of God his words matched his life. Peterson was faithful to his small church he did not need to be a superstar he wasn’t captivated by fame. Bono from U2 called him and invited him to come to visit his home on the French Rivera, Peterson politely turned Bono down because he was in the midst of translating the book of Isaiah. After Eugene got off the phone with Bono, Peterson’s wife looked shocked and said: “You aren’t going?” He said “No” she then said “But it’s Bono!” to which Peterson replied, “But it’s Isaiah!”

He lived the message of a relentlessly loving God in the context of his local church and the life of his family. His life message was that a loving God who created us is in relentless pursuit of us. That will preach. May God give me the grace to preach this very message to me first and my church and family second.

2 thoughts on “Parents What Message are You Preaching to Your Kids.”